What is going on with OSAP?

An ongoing coverage of changes to post-secondary funding.

It has been more than a month since the Ford Government’s announcement of significant changes to the Ontario Student Assistance Program (OSAP) that will see a lower income threshold for those who qualify for a grant and/or loan funding as well how much funding will be made available starting in the 2019/2020 year. In addition to OSAP changes, the provincial government has also made many ancillary fees optional under the Student Choice Initiative. What do we know about the changes so far and how have people responded?

The major changes had been laid out in an announcement by the Ministry of Training, Colleges, and Universities on January 17th. These changes include lowering the family income threshold for receiving funding from $175,000 to $140,000. As well as changing the ratio of grant to loans for post-graduate degrees, diplomas, and certificates to a minimum of 50%. This will ensure that more money distributed through OSAP will be in the form of repayable loans rather than grants. It will especially impact those students who have been receiving more grant money than loans through OSAP.

At the same time, the government has instituted a 10% cut to tuition costs across post-secondary institutions with a freeze to be imposed the following year. These changes are done to save students some money while at the same time to mitigate the cost of OSAP to the government. This change was advised by a report from the Auditor General which states under Chapter 3, Section 3.10 of the 2018 report, that while the increase of grant recipients has increased under OSAP amounting to a $2 billion cost, the admission of new students into post-secondary institutions has barely increased. With only 1% growth for universities and 2% growth for colleges.

A large issue has been the removal of the 6-month interest-free period provided to OSAP recipients following their graduation from their respective post-secondary programs. According to the initial report released on January 17th, the ministry will “align Ontario’s repayment terms with that of the federal government by charging interest during the six-month grace period, to reduce complexity for students.”

We spoke on the phone with Abdullah Mushtaq, Director of Advocacy at the College Student Alliance(CSA). CSA is an organization which “advocates on behalf of Ontario college students in partnership with student leaders.”

Mushtaq says CSA was disappointed by the announcement of the most recent changes to OSAP and the introduction of the Student Choice Initiative. CSA released in a statement “ The provincial government has effectively destroyed student representation at the college level and made post-secondary education less affordable by making student association fees optional and financial assistance less accessible.”

Mushtaq expands on the importance of student association fees: “they (students) get access to services like a food bank or on-campus services like the service of their student union for academic appeal, centres for marginalized students and international students. All of these things are what the student association provide. If these are taken away students won’t know what they are missing until it is too late.”

When changes were being made Mushtaq says “There wasn’t proper consultation with student groups.” He also notes that, as of late, they are now working “pretty well” with the minister’s office partners while also continuing to speak to the various CSA stakeholders.

In data gathered and originally reported on by the CBC at the beginning of February, the previous OSAP system that was put in place back in March 2017 under the previous government, paid for the average cost of tuition among students who came from lower-income households making below $50,000. Over 234,000 students benefited from the non-repayable grants.

Students of Centennial College stand to be one of the most affected by the change in policy as it has the second greatest number of domestic college students in the province, amounting to 7,080, who received free tuition through the old program. At the time this data was gathered, this accounted for 72% of all full-time domestic students at Centennial.

In a prepared statement from Centennial College regarding the recent changes, they stated.

“…The province has not yet clarified or documented the details, and we continue to participate in briefings to learn more. We have always offered affordable education, giving students access to more than $3 million in Centennial College bursaries, and Ministry partnered bursaries and scholarships to help meet their financial needs. Our Doorway to Dollars Questionnaire is your first step in applying for scholarships and bursaries.”

CCSAI President Sam Casais echoes the CSA’s concerns of the situation in his written statement to The Courier.

“While it was positive to see clear steps made to reduce the cost of education via a tuition reduction, the other portions of the announcement are very concerning… a shift to loans could make education less affordable for a great number of our students. the Student Choice Initiative will pose challenges to the CCSAI and many College departments to deliver all the services we have always delivered to students.”

Since the announcement, there has been a negative reception from students who are to be the most affected by the significant change in policy. Criticisms took the form of a massive protest of students outside the legislature and the circulation of a petition calling on the Ford government to seize the changes. As of the writing of this article, the petition has received over 247,460 signatures.

Regardless of the change, Casais says “We will work hard to serve students as best as we can through these challenging times and hope that students see the value that we bring to their Centennial journey.”

To find out how these changes could affect you, speak to a representative at your financial aid office for guidance.
For more information contact Student Financial Services office at 416-289-5000 ext. 2457, or email them at:
[email protected]

For the complete statement from the College Student Alliance, visit www.collegestudentalliance.ca/2018-news. 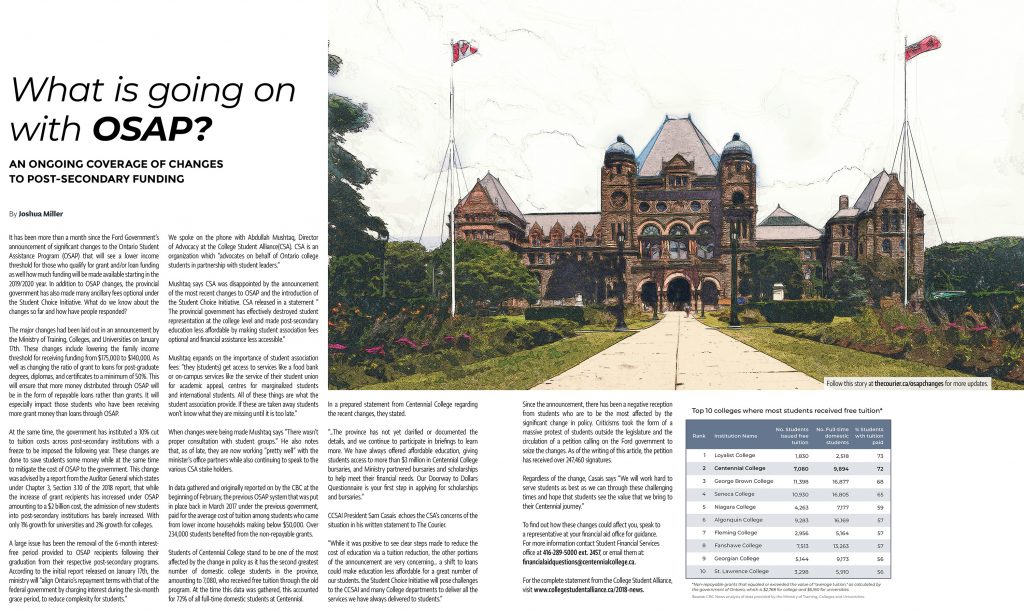