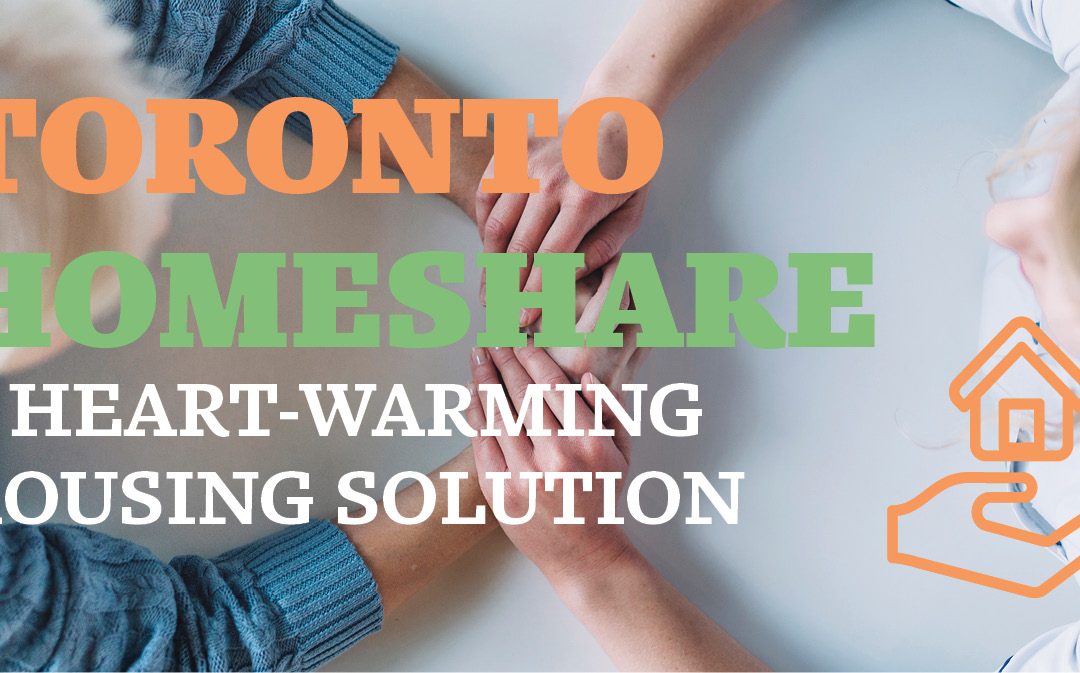 Dr. Raza Mirza Network Manager for the National Initiative for the Care of the Elderly (NICE)

How does the process to enter a home share work?

Essentially the student learns about the program through their housing office, or a friend or family member, or through the media, they go online or to an information session and fill out an application form. The application is reviewed by a social worker and on the flip side of it a homeowner fills out a form. We have a pool of homeowners and students and our social work team actually does the matching based on the questions that they are answering and the interview that takes place. This model is a facilitated model and essential what that means is unlike Craigslist or Kijiji where the homeowner and student are meeting on their own and trying to figure out if they’re a match, it’s facilitated by a social worker – first based on your application and second based on an interview – whether it is a good match or not.

Are there any restrictions or issues with eligibility for students applying?

A lot of the empowerment in terms of decisions goes into the hands of the student and the homeowner to try and figure out whether it is a suitable arrangement and then the social worker will basically facilitate that process. If the homeowner agrees then yes, but the process does involve a vulnerable sector screening.

People reported feeling less isolated, that their general sense of well-being went up. We saw that it would delay a move out of the community, not only for the older adult but also for the student. There was a lot of reciprocity between the older adult and the student and the inter-generational piece was something that made us all quite happy.

Is a student then paired with a homeowner?

The pairing process is a little more rigorous than just an application form.

One of the other pieces that is important to know is that… the rents in the city (of Toronto) are anywhere from $1800-$2100 for one bedroom, one bathroom. When we did a review last year, a furnished bedroom – a shared space – was going for anywhere between $1000-$1600, on average a shared living arrangement was costing about $1200.

The other novelty of the program is – not only is the program facilitated by a social worker – that the rents are quite inexpensive because they range between $400-$600 a month. In the city of Toronto that is unheard of. The way that the student subsidizes that rent – which would have cost them $1200 a month – is by contributing to the household in some way. They’re agreeing to take out the garbage, walk the dog, cook a meal, or watch a movie together once a week. Something like that, that the homeowner and the student are agreeing to. That five to seven hours a week that they are committing to do these things leads to the subsidy that they are receiving.

There is an exchange beyond just the financial transaction. Prior to moving in, these things are worked out. So if you are going to be living here for a semester or two semesters, this is what you are agreeing to do.

Then when the move-in happens, there’s a whole guide on how to move in and it’s just a regular move-in at that point. There is a social worker that is available to mediate any issues that might come up and to discuss the transactions in terms of the financial commitment that the student is making when the payments are going to be made. So all of these details that are sometimes hard to talk about with a roommate or someone you’re living with, is again mediated by a social worker.

How long does the process typically take to get housing?

When people are looking for housing, they’re not really planning too far ahead but often need it very quickly and so we really worked to get the process down; so the point where you fill out an application form, a social worker reviews it, finds a suitable match for you, you do a vulnerable sector screening and all these other steps that have to happen, we are able to do that in 10 to 12 days now.

Safety and security is a really important piece of this program, so we couldn’t cut it down any more than 10 to 12 days just to make sure the interview gets done, the home audit gets done, vulnerable sector screening gets done. So that takes a bit of time but we’re happy with how quickly we can do it. 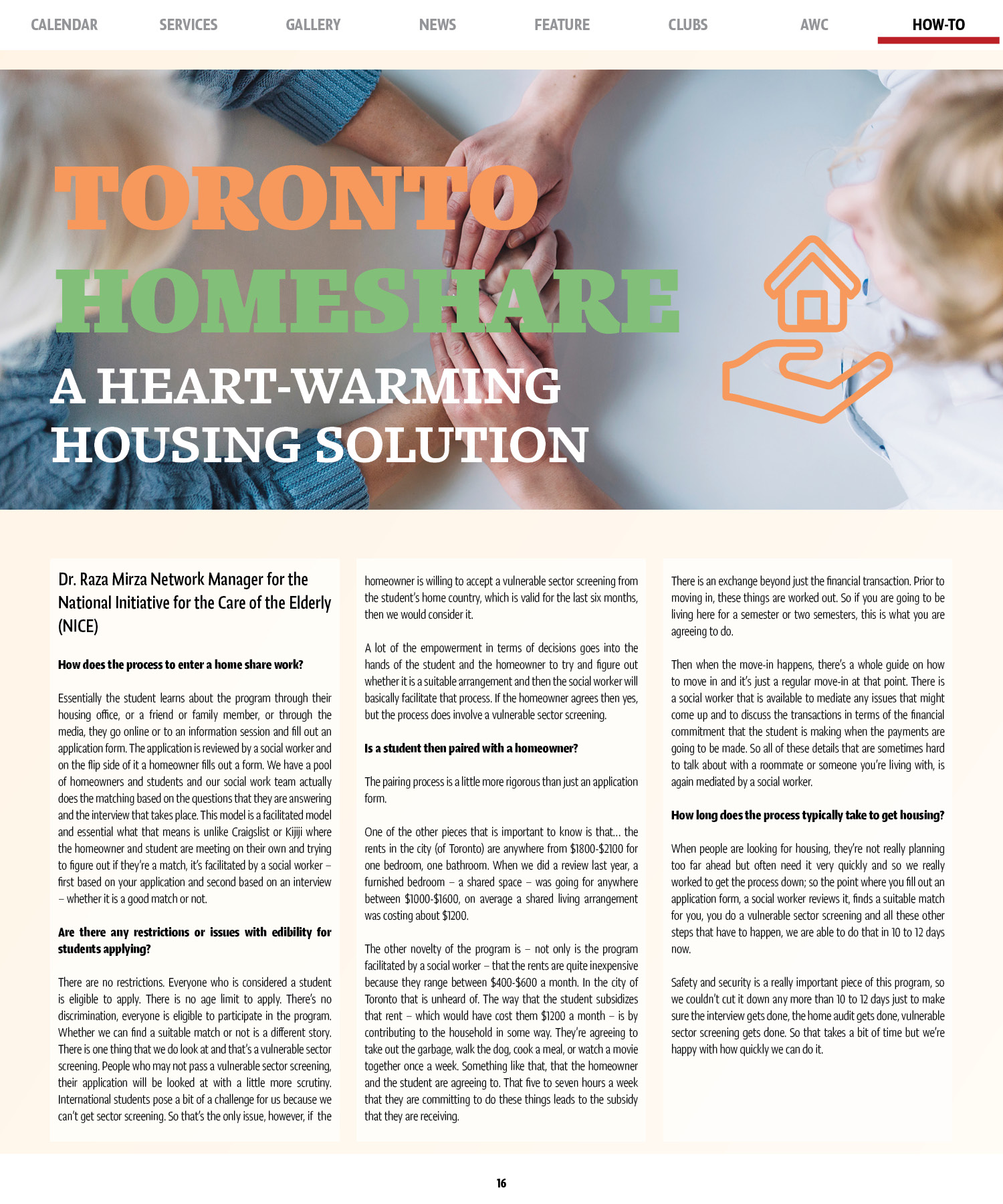 I would say that it was very successful in terms of the outputs that we were looking at and some of the things we were not expecting. The ability to address affordability in making housing affordable, not only for students but also for homeowners who might be living on a fixed income because they’re older adults. It puts a bit more income in their hands as well.

We get to leverage this opportunity as well, that there are two million empty bedrooms in the city of Toronto in the homes of older adults. So we are looking for novel ways to utilize and leverage that to give a little more than just money as well because people feel isolated, they feel like they don’t belong to the community in some ways.

So these factors we were able to address in the pilot. People reported feeling less isolated, that their general sense of well-being went up. We saw that it would delay a move out of the community, not only for the older adult but also for the student. There was a lot of reciprocity between the older adult and the student and the inter-generational piece was something that made us all quite happy.

I would say it was a success. Most of the people that started the program last year continue to live together, continue to remain friends. A network of people who have been participating in these programs has also formed. So that’s very good to hear, especially in a world where we hear more and more about loneliness and isolation.

How many students are currently housed in the program?

We have a mandate from the City of Toronto to house 200 students and 200 older adults, so 200 matches, which equals 400 people this year. I don’t know the exact number this morning, but I’d say it’s closer to 77 or 78 matches and our aim is by the end of the year to have 200 matches.

We are looking to expand the program across the country. We are going to start by expanding it across the province hopefully.  I think the big piece about it is that we focused on how we could scale it and replicate it. To have community partners such as the universities and colleges has been really impactful for us because we get a gateway to meet students through the housing office, and homeowners feel a little bit more comfortable knowing we are working with universities and colleges because they also have their own code of conduct that students have to abide by as well. 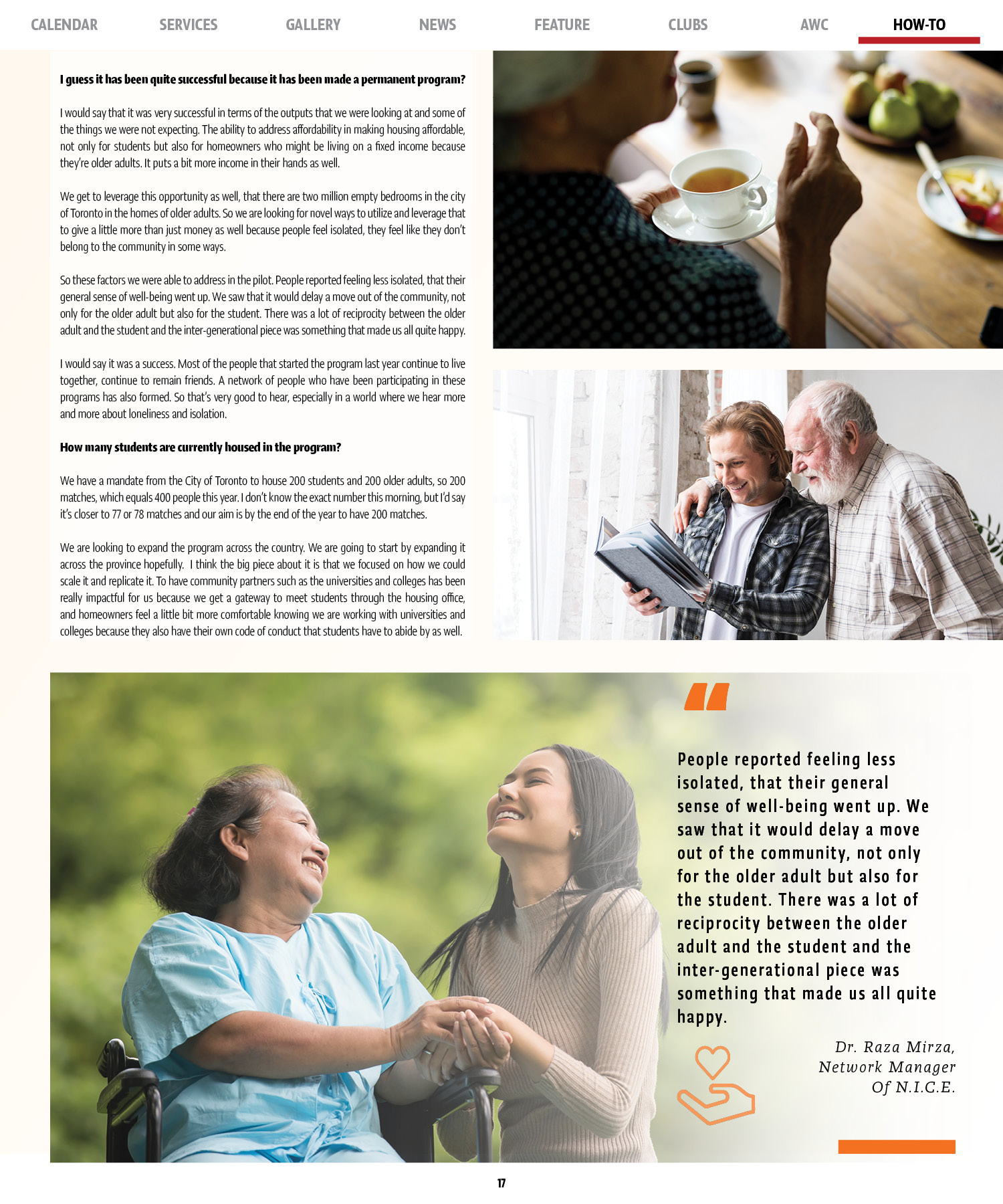