The Courier spoke with Brittany Greig, president of the College Student Alliance, about the #textbookbroke campaign which seeks to raise awareness about textbook affordability, and bring open educational resources to campuses around the province. The CCSAI was one of many college student associations to run the campaign. The Ontario Undergraduate Student Alliance also promoted the campaign across the province.

We're excited to spend the day with @ccsaitoronto at @centennialcollege to talk about #OERs and #TextbookBroke. Want to participate? Share a photo of your receipt and share it online!

What is the concept behind #textbookbroke?

To raise awareness among students about what open educational resources (OERs) are. The majority of the student population doesn’t know about them because they are a fairly new thing. They are, essentially, free textbooks and resources that students can use in place of the traditional textbooks that they have been buying. And faculty would be using these instead of the resources they have, they would be creating them and adapting them.

The reason we want student awareness around these OERs is because when students are aware they can advocate. So it’s more than just the student associations advocating, it’s actual students that are going to their program coordinators, going to their professors … “Have you heard about OERs?” and explaining to them so that we can adopt them in the school system.

I know that I went to my program coordinator and talked about it and now at Conestoga my program is looking at moving as many of our courses to OERs as we can. So one student advocate can make a huge difference. It’s making the general population of students aware about these awesome tools and resources that they have.

What has the response from students been?

I think the response has been pretty good on all campuses that we’ve heard from and creating that awareness. I think students really opened up to this one, because especially during the first couple of weeks, there’s a sticker shock that comes with buying textbooks. I know that we on our campus had a student that spent $1077 in one semester on textbooks. They were in the nursing program. It’s just that high shock sticker value “I could have done so much more with this, this is over a month’s rent, groceries, this is my car payment.” There’s just so much that comes with that sticker shock, so it’s just promoting it and I think students take really well to this campaign.

Business educators at @CentennialEDU moved to #OER & open textbooks last year; over 2000 learners gained an extra $100 to spend on essentials. However, many students are still #TextbookBroke. Take a look. #YourTake pic.twitter.com/hnoaUyNGZz

ECampus Ontario has over 200 textbooks that can be used and adapted.  What we’re looking at is promoting to faculty to create these open educational resources. So to have faculty create and adapt textbooks that would be made open that could be put on ECampus. That’s the start of it. For a nursing program it would be having professors get together and collaborate and create these OERs so future nursing students can have them.

We are promoting to faculty to do that and there are grants from ECampus Ontario, so we explain that to professors so they know they have the opportunity to get grants to pay for the creation of these textbooks.

Have you heard any response from faculty or colleges?

The faculty really cares about students and they care about the students’ success. They understand and were once students themselves, so a lot of them are onboard with this. Some start with being skeptical of the quality if it’s free. It’s helping them understand that they get to create the textbooks, they get to help with that, they can adapt the textbooks. So because it’s an OER if they want to change or add a chapter they have that right to do that. As opposed to being restricted to the use of this one textbook that may be outdated or may not have something that just happened, they can add to that textbook.

Another really cool thing is that students can add to the textbook. So when a student does an assignment if the assignment is in line with course material of the textbook it can be added, say it was a case study, it can be added if the professor finds it went well. Students spend hours on these projects and they’re never seen again. So it’s being able to use different avenues… having students help write the textbooks and understand the course materials.

What are OERs and where can I find them? 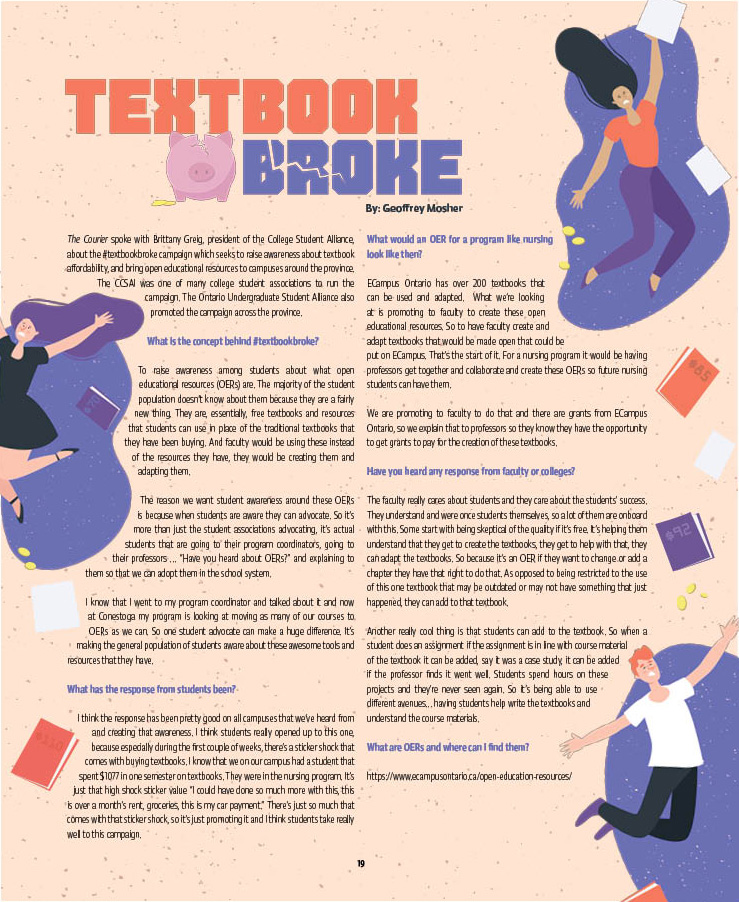