The Model of Possibility: Resilience

t was a full house with students, staff and members of the local community in the audience. The energy in the room was phenomenal for the first Centennial College TEDx at the Student Centre on October 25th; which was around the theme “resilience.” A line-up of inspiring speakers took the stage and captivated the audience with their personal anecdotes. If it’s one thing the event taught us, it’s that there is always a way. From those suffering from physical pain to social injustices; held back because of poverty, or lack of education; or those being displaced, discriminated against or abused; and even those just trying to get through everyday life; it takes a lot to reach inside and find strength! However, with some grit and persistence, we all have the power to take control of the here and the now — because anything is possible with a little resilience. Here are some of the highlights of the event, for those who couldn’t make it.

Anjani Surelia, a student attendee, elaborates on her experience. “As soon as the TEDx announcement was made I participated in the contest and won myself tickets to the event. Melissa Grelo was the MC, which was a delight to watch. She shared her story of resilience, on how she made her way to The Social on CTV news. Being a TEDx enthusiast, it couldn’t have gotten better than this for me!”

“Brandon Love mesmerized the crowd with his magical tricks which definitely stole the show. We are living in an illusion of distinguishing things which we know and which we don’t, the illusion of what we think is true, and that moment is when life happens, and we surrender ourselves to our ego, the demon of “I am”. Blaming is very easy and it’s even more easy to criticize but accepting is tough. It’s hard to stabilize the mind between the feeling of right and wrong.” Brandon Love guided the audience to build ways to break all these barriers of illusions and uncertainty.

Anjani was particularly moved by Erin Wilson’s story of resilience. “True freedom is only when we remove all the labels of shame, grief, negativity, and grudges aside and live our life by focusing on just us. Casting out these boundaries and labels are hard, and Erin Wilson shared her story of resilience of replacing those labels to foster positive change.”

Sharing a personal anecdote, she elaborates further, “I failed in one of my postgraduate courses and I wanted to quit the program. From where I’m from, it is shameful to fail in academics, and that humiliation made me feel weaker every single day. After listening to these speakers, I understood the meaning of resilience. I was quitting just because of the embarrassment. I wanted to complete it, but the fear took over about what people will say. In this event, there were stories of survival, stories of self-made men and women, of what gave them strength. This gave me motivation because I am at the same stage right now. I decided that I will take that subject again and I will try my best to pass this time.”

Erin Wilson, who is currently a Centennial student and was one of the speakers, talked about her unique experience.

“I was very excited leading up to the event until about a week before, then I became incredibly nervous and began to have a lot of self-doubt. The rehearsal melted away all my nerves, stress and doubt. Standing on that red circle on stage with a TED sign behind you is a very empowering feeling. That night was great to get to know the other speakers as well, to build a bond over our shared experiences and realize that I was having the same fears that every other speaker did. The event day itself was a very surreal experience. If I can give TEDx talk about something so personal, I definitely can face anything else that comes my way.”

Ravneek shares his thoughts about some of the other speakers. “It was fascinating to hear from Najeeb Khan; his outlook really changed my thought process. He talks about how AI and machines will soon take over the workload of the people and leave them with nothing to do, which poses a big concern in terms of survival impacting the whole world. He gave a great solution by introducing the three p’s (Play-Problems-People). He explained that using these three p’s to your strength and enhancing ourselves, thereby focusing on doing something new, is the way to succeed.”

For those who are fans of animated movies, “Hellboy” is one film that you must be eagerly looking forward to! It was indeed a fan moment for many to hear from and interact with Nikita Lebedev, who is working on the character for this movie.

Erin talks about how much she loves the TED platform; in fact, much before this opportunity came to pass, she had made it her New Year’s resolution to listen to a new TED Talk every day in 2018. Being able to give a TED Talk was a bucket list item she didn’t even realize was on her bucket list.

Talking about how she enjoyed being on the speaker panel and listening to the others talk, she elaborates, “I think my favourite moments were in the speaker’s room on the morning of the event. All of us gathered together making last-minute tweaks, sharing, caring and experiencing this crazy event together. I loved listening to everyone else share their stories, their ideas, and their viewpoints. I spent my day laughing, crying and being utterly in awe of all the other speakers.”

Traditions and culture are the roots of our identity and bringing that tradition to a whole new environment, challenging the stereotype and giving the world a new taste of living is just Nick Lui’s style. He explained that resilience is in the skills you have shown from an early age; sometimes you just don’t recognize it.

Asking Erin about what advice she would like to share with fellow students, she says “Seize every opportunity, especially the ones that terrify you. Those are the ones that will change you and allow you to grow the most.”

Speakers at the event, Shamim Ahmadi and Tahani Aburaneh shared their stories about how resilience made them stronger every day. Every now and then, things are not in our control and strong women make best out of those time too. Their lives in a refugee camp were not easy, and one needs a lot of power and courage to speak about the insights of refugee life, which both Shamim and Tahini did so courageously.

Echoing those thoughts, Anjani adds, “The toughness, the hardship, the trauma that we face mentally and emotionally do leave a big impact in our current state and thoughts. Resilience is all about gathering all the strength and moving past that by learning from mistakes. Resilience is the “will” which is not bounded by the fear of falling a thousand times. Resilience for me is saying, ‘I am not ashamed of my failures’. I want to share with every fellow student that resilience is that middle point where one can make or break oneself.” 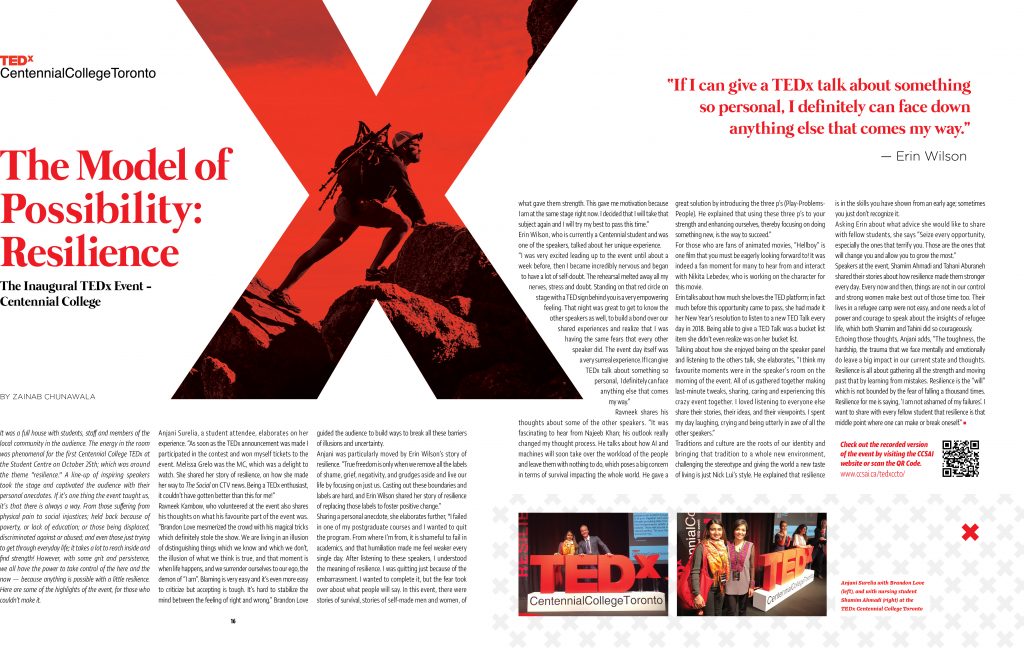