Smokers Up In Arms Over Smoking Areas 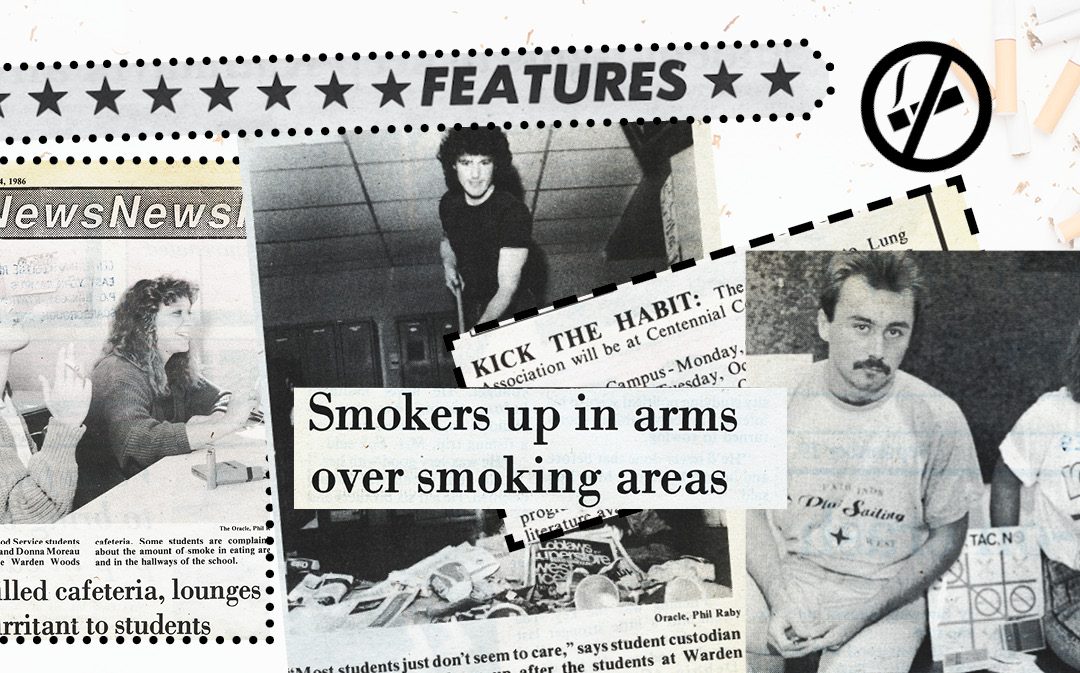 Smokers Up In Arms Over Smoking Areas
By Robin McNamara
Sept 19, 1988

Students are circulating a petition at Warden Woods Campus, demanding that the upstairs lounge be turned into a smoking area.

“I don’t have time between passes to run down to the little room in the cafeteria, and I am not going to run outside to smoke in the winter,” says Hospitality student Seamus Laverty.

Three hundred and eighty students have signed the petition, which was circulated in the upstairs lounge and other nonsmoking areas of the college. Supporters include 48 non-smokers.

Laverty says the mandatory smoking policy has not stopped him from smoking in the lounge. “We all do it,” he said. “We have nowhere else to go,” he said. “The room in the cafeteria is just disgusting.”

Since Sept. 1, smoking has been restricted to a small section of the Warden Woods cafeteria, and Laverty says the space is not clean or properly ventilated. “Of all places to have a smoking area, why would they put it in the cafeteria?” he asked. “You are supposed to eat there, but it is disgusting. I wouldn’t eat there. I wouldn’t even let a dog eat in that room.”

And the safety of the area is another concern, Laverty said. “I’ve worked in a restaurant that was slightly larger than that room and it had a capacity of 80 people. When you get a hundred or more smokers in there it has to be a fire hazard,” he said.

Laverty said he hopes to get “action” from the Student Association after he presents Vice-President Carrie Soules with the petition. But he said if the smoking area is not expanded, he will take his complaint to Centennial’s administration. “If we have to go higher to get what we want, then we will,” he said.

A pall of smoke hangs over the room and music pulses from the speakers. If the lights were dimmed, this could be any dingy bar on any airport strip.

But it’s the cafeteria at Warden Woods campus at lunch time. When you walk in, the smoke from many cigarettes sticks to you like sweat.

Tucked at the far end of the room is a group of about 11 tables. Among the myriad of posters on the walls are little signs proclaiming this to be a non-smoking area. The signs aren’t working.

Often, especially at busy times, you’ll find someone puffing away at one of these tables. But most non-smokers don’t seem to mind.

“The smoke comes over from the smoking section anyway,” says Kathy Kripp, a second year Hospitality student. And others say that as long as smoke isn’t blown in their faces they don’t mind. A few of the shyer students think the college should police the problem.

Faye Collins, an RNA student, says the college and the SA “should encourage non-smoking by having larger non-smoking areas.”

“If they ask politely I’ll do it,” says David White, a third year Hospitality student, when asked if he would stop smoking in the non-smoking area if requested to.

Another guilty offender, Heike Hangebruch, in second year Hospitality, asked, “What’s going to happen at 12:30 p.m. when the smoking section is full?”

Still, most of the students interviewed agreed the cafeteria should be expanded and the ventilation system improved to combat the smoking problem. 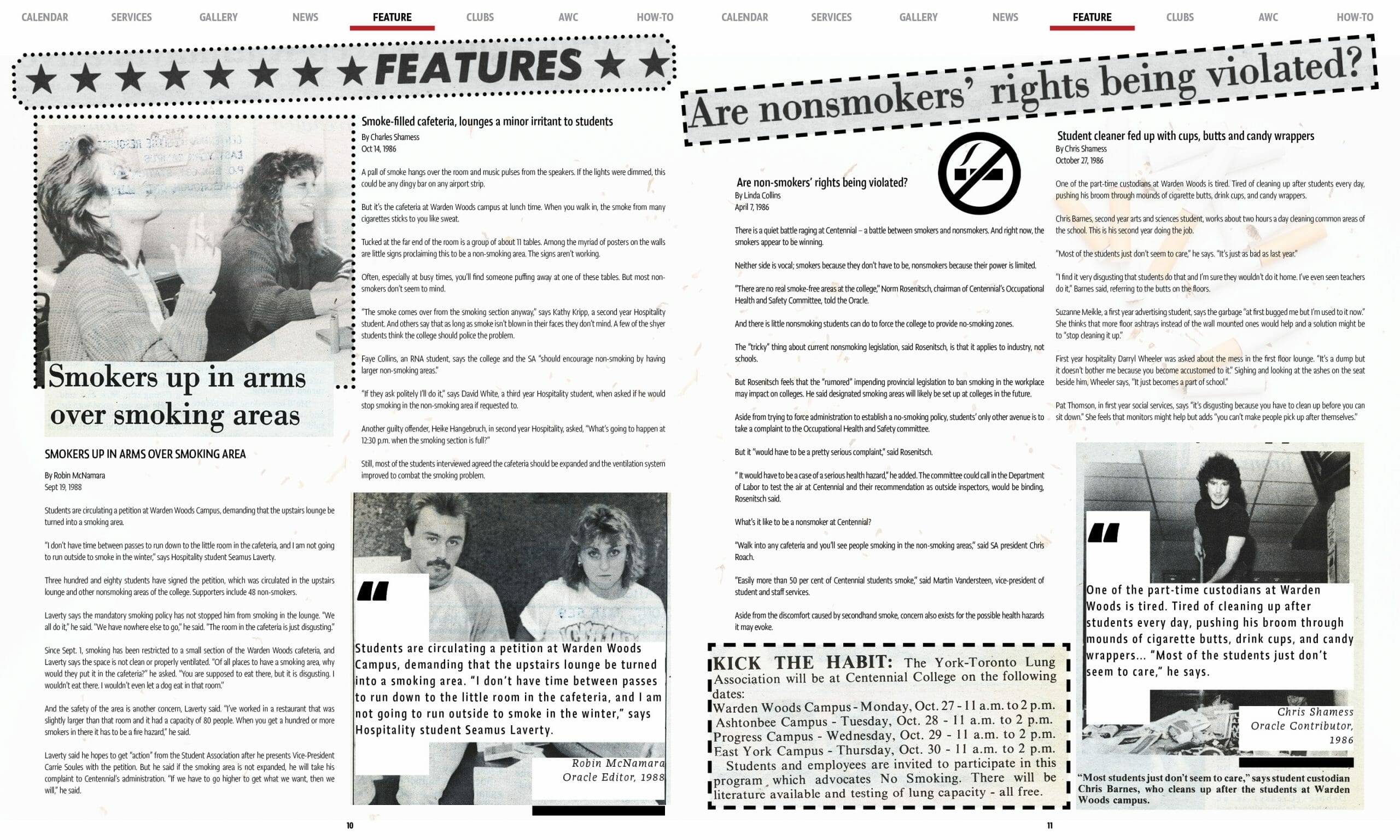 Are non-smokers’ rights being violated?
By Linda Collins
April 7, 1986

There is a quiet battle raging at Centennial – a battle between smokers and nonsmokers. And right now, the smokers appear to be winning.

“There are no real smoke-free areas at the college,” Norm Rosenitsch, chairman of Centennial’s Occupational Health and Safety Committee, told the Oracle.

And there is little nonsmoking students can do to force the college to provide no-smoking zones.

The “tricky” thing about current nonsmoking legislation, said Rosenitsch, is that it applies to industry, not schools.

But Rosenitsch feels that the “rumored” impending provincial legislation to ban smoking in the workplace may impact on colleges. He said designated smoking areas will likely be set up at colleges in the future.

Aside from trying to force the administration to establish a no-smoking policy, students’ only other avenue is to make a complaint to the Occupational Health and Safety committee.

But it “would have to be a pretty serious complaint,” said Rosenitsch.

“ It would have to be a case of a serious health hazard,” he added. The committee could call in the Department of Labor to test the air at Centennial and their recommendation as outside inspectors, would be binding, Rosenitsch said.

What’s it like to be a nonsmoker at Centennial?

Aside from the discomfort caused by secondhand smoke, concern also exists for the possible health hazards it may evoke.

One of the part-time custodians at Warden Woods is tired. Tired of cleaning up after students every day, pushing his broom through mounds of cigarette butts, drink cups, and candy wrappers.

Chris Barnes, second year arts and sciences student, works about two hours a day cleaning common areas of the school. This is his second year doing the job.

“Most of the students just don’t seem to care,” he says. “It’s just as bad as last year.”

“I find it very disgusting that students do that and I’m sure they wouldn’t do it home. I’ve even seen teachers do it,” Barnes said, referring to the butts on the floors.

Suzanne Meikle, a first year advertising student, says the garbage “at first bugged me but I’m used to it now.” She thinks that more floor ashtrays instead of the wall mounted ones would help and a solution might be to “stop cleaning it up.”

First year hospitality Darryl Wheeler was asked about the mess in the first floor lounge. “It’s a dump but it doesn’t bother me because you become accustomed to it.” Sighing and looking at the ashes on the seat beside him, Wheeler says, “It just becomes a part of school.”

Pat Thomson, in first year social services, says “it’s disgusting because you have to clean up before you can sit down.” She feels that monitors might help but adds “you can’t make people pick up after themselves.”