The Story Arts Centre has installed a new kind of tech, and it’s the first college in Ontario to do so!

Sitting just outside the southern doors of the cafeteria, the NovelBranch somewhat resembles the vending machines inside. But rather than snacks, this kiosk dispenses books to borrow.

Librarian Mikayla Redden was first made aware of the “book vending machines” in the Halifax airport, where she used to live. Inspired by the discovery, she had originally pitched them for some of the smaller Centennial campuses that lack a full library. But when it was announced that the Story Arts Centre library would be under renovation for some time, it was decided that NovelBranch would come here instead.

“The plan is for it to be permanent,” said Redden, when asked about the Novelbranch’s future after the library renovations are complete. “We’re hoping that if it’s used enough, we’ll be able to justify buying another one for other campuses.”

At the moment, the librarians on campus operate out of a small space on the second floor, no bigger than a classroom. The former contents of the library are currently in the school basement, where students are unable to access them. Several times a day, a library tech goes to the basement with a box in order to pick up the requested material.

“The current setup with the books is unfortunate,” said Redden. “We are upstairs, there are no books, and there’s nothing in the old library.”

A student must know ahead of time the specific resource they need. There are no impulse rentals this way, no spontaneous choice based on an eye-grabbing cover or interesting subject matter. Additionally, the librarians are only around to retrieve books during certain hours, unlike the NovelBranch, which will be available as long as the campus is open.

“It’s always going to be available around the clock,” said Jane Burpee, Centennial’s Director of Libraries and Learning Centres. Burpee adds that she believes that it will be very beneficial to students to have access to.

How does it work?

“I’m aware of it, but I’m a bit nervous to approach it,” said student Alexis Ramlall, but added that she might feel differently if she knew more about it.

Another student, Cheska Lim, also said that he hadn’t tried it out yet, but that he thought it “looked cool”. While the new piece of machinery may seem intimidating, it is extremely simple to use, as long as one has a Centennial student card.

The NovelBranch operates by using radio frequency identification (RFID) sensors. When someone uses their Centennial card to open the door and remove the required materials, after the door closes the scanners are able to detect which materials were removed, and track which student rented them. A receipt is printed which indicates the due date, and once the student is finished with the material they can simply open the NovelBranch and return the book.

“NovelBranch was originally conceived from a conversation with a customer who was interested in a creative and intuitive way of engaging residents in an underserved community,” said Allison Standen. Standen is the cofounder of NovelBranch maker Convergent Library Technologies, which is based out of Ontario.

“While a branch was planned for this part of town, it was several years away from reality, so in the meantime, the Library sought to find an outreach kiosk option.”

The resulting piece of technology became NovelBranch. Standen said that she had originally anticipated further orders to be in the same vein of need, but she was surprised.

“NovelBranch’s potential was far broader,” Standen said over email. “It provides open but secure access to specialized collections, such as Course Reserves in universities and colleges, as well as fulfills an outreach mandate where satellite campuses would benefit from a local library collection.”

The NovelBranch holds approximately 125 books, and Redden says that the plan is to rotate the collection every two or three months. The turnover could be potentially quicker, if students return rented materials to the temporary library node on the second floor instead of placing them back in the NovelBranch.

“It made a lot of sense,” said Burpee. “It’s allowing students to be independent in borrowing books again.” 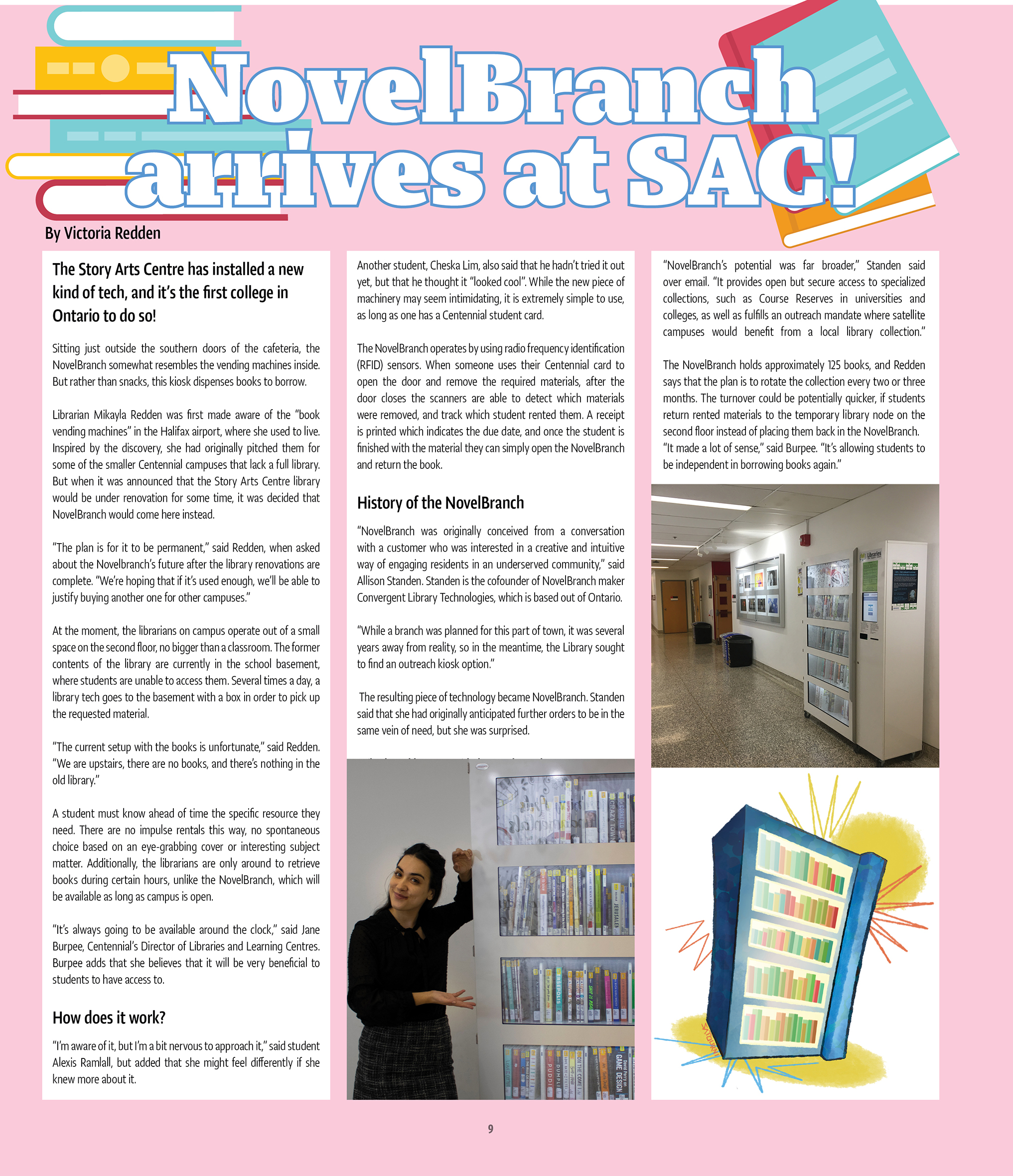