How did you originally get involved with the club?

I came to international orientation and I met the liaison officer from CCSAI and she was indicating that we have a decent Caribbean community and there wasn’t any club of this nature. So she proposed it to me and I decided to do it.

What was the process of starting the club like?

Since we started it, I seem to be recognizing more and more Caribbean people that will be on the campus. I’ll approach them and a lot of them seem to be interested because we’re from the Caribbean so the culture is different, the environment is different. So they appreciate having a club of this nature so we can come together and it’s a community that we’ve formed. For people from the Caribbean community is a big thing.

What types of programming have you done so far?

We’ve been a little slow of the bat because of our challenges with time, but we have a yoga session slated to happen the beginning of next month and we’re also working the CCSAI to collaborate on a Soca-robics session. So it would be incorporating Soca and aerobics. We also participated in the celebration of Black culture that was held by CCSAI and participated in Pride Week.

Additionally, we are working on a club constitution. We haven’t formalized it yet, but we are working on a book of resources that everybody in the club can use. You know how in football you have a playbook? This would be something we pass onto the new executive and new members of the club and they keep compiling it. We are hoping to have a good plan of succession, so we pass it on to future people so the club will always continue. So when people come in we can say you’re new to Canada, you’re new to Centennial you need to ensure you have all this done. We want to make it easier for future students who come from the Caribbean who may not know how to access things or what they need to do.

One of the greatest challenges students have when they come here from the Caribbean is the transition. You hear a lot about Canada but you don’t really know what to expect. So you come here and you don’t have someone to guide you, you can get lost in the system. You don’t know when’s the best place to buy winter boots, if you need them, how do you deal with the winter? Even simple things, it won’t just necessarily be about things on campus; how to get your registration done, how to get your SIN sorted out. Little things that we as students would have recognized the importance of having been here.

Right now we’re in the process of figuring out how we’re going to handle the succession. When we go to our next meeting that will be something that we discuss in terms of how we’re going to pass the baton on if we’re going to have elections. These are things that will go in our constitution. We’re trying to create those things that will make it easier for another executive to come in. I think the Caribbean population at Centennial is growing. We have lots of students at other campuses too and we hope to have meetings there this semester.

While it’s a Caribbean club, it is open to all people. If people want to know more about the Caribbean and our way of life they are free to join the club

Do you have any advice for students looking to start their own club?

You need to have an understanding of what it is the people you want to represent need from you. When we were doing the open house, one of the things when I was speaking to prospective members I was saying “tell me what you want from us,” because although we’re trying to create a community for you we want to ensure that we’re providing you with what you need. Every meeting we go to, we try to discuss the challenges that students are facing and what they want to do. One of the most important things, when you are creating a club, is ensuring that you are meeting a need.

What has finding this community meant to you and how do you see it growing?

In the Caribbean community is a big thing. For example, you have children, we believe your community helps you to raise your children. Community is a major key to how we survive. I find that students gravitate towards that.

When a new set of students came to campus in January I was in the bookstore and I heard some girls talking and they sounded Jamaican and I said that we had the club would they be interested in joining. They asked me nothing about the club they just said “yes yes yes” because I find that people want a space where you can associate with people who understand what you’re going through. The professors and students here are helpful, but they don’t understand it from your perspective, they don’t understand the adjustment. When you have a community who you can share that with they understand the struggles. I think it’s a selling point that this is what we focus on. It’s about relationship building and making sure everyone is ok. 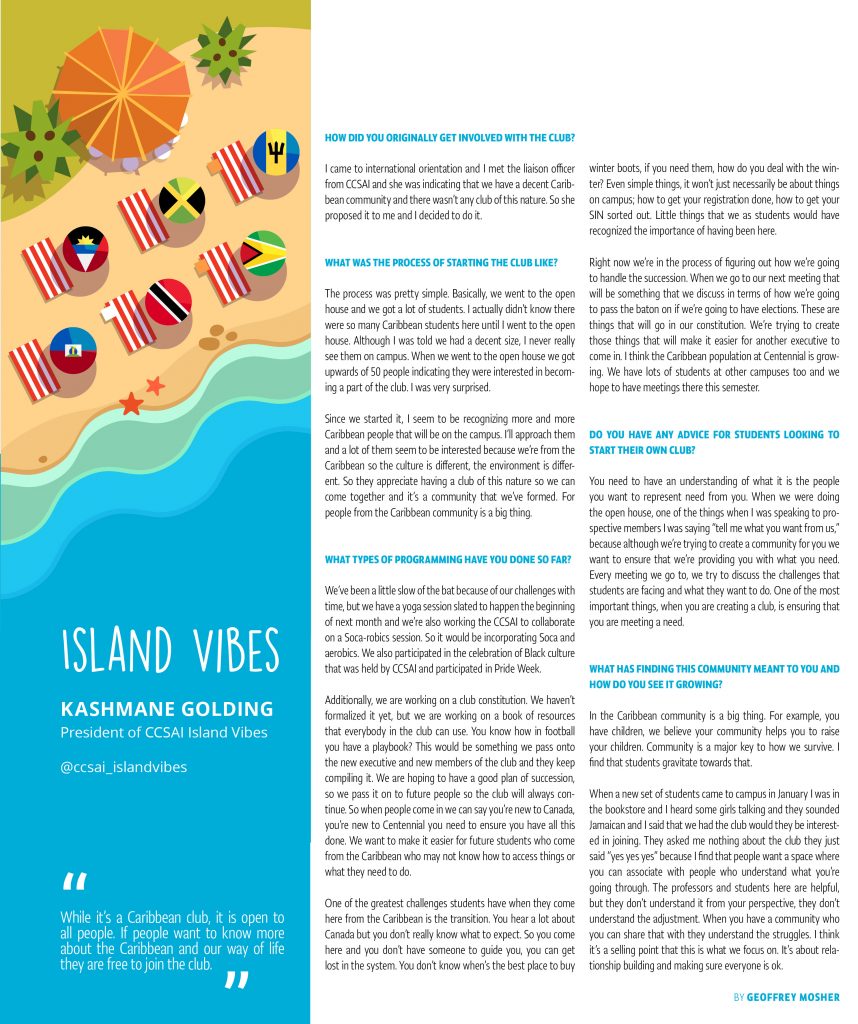