Plans to begin construction of a student centre at Centennial’s Progress campus are tentatively scheduled for fall 1993, said the vice-president of the Student Association (SA) Danielle Tower, at an open meeting on Feb. 4.

The centre will most likely be licensed to sell alcohol and be a place in which students and alumni can socialize, said Chuck Gullickson, director of student life, during a telephone interview.

The SA has delegated $50,000 out of its budget for the construction of the centre this school year and all students contribute to funding as well.

“We started levying a building fund of $10 as of the fall of 1992,” Gullickson said. “All full and part-time students are charged this amount each semester through their tuition.”

Members of the SA and administration members on the committee for the building of the Centre, have visited similar spaces at Sheridan, Humber and Mohawk colleges “to look at the kinds of facilities they have, how they’re managed and how students use them,” Gullicson said.

The 7,000 square-foot space will most probably hold a pub, study and lounge space and some kind of food court, he added.

Eventually, there will be student centres at all Centennial College locations, said Lisa LeBlanc, applied arts representative of the SA.

“One of the reasons the Warden Woods campus isn’t getting a centre first is that there is a multi-million dollar plan for renovations of that campus in the near future,” LeBlanc said, adding that those renovations would include the addition of a student centre.

Construction for the much-anticipated Student Centre at Centennial College’s Progress campus is getting closer to beginning each day.

The often-delayed centre, which will house various services for students such as a pub, arcade and medical clinic, is now very close to getting final approval from the college.

The only sticking point is what to do about a proposed restaurant food kiosk the SA wants in the centre, says Chad Peters, student association president.

“We’ve been having two meetings a week to get this done,” Peters says.

Peters is hoping to get an established restaurant chain into the centre, but the SA’s proposal to have a food vendor in the Student Centre conflicts with the college’s contract with Beaver Foods.

In addition, the Student Centre restaurant would take profits away from the college, giving them to the SA, says Peters.

One proposal the SA has just begun to consider is running their own restaurant instead, says Peters.

There’s been successful models for this. York University’s “Underground” is a successful restaurant/pub/nightclub which is a perfect example of a quality, student-run facility, he says.

The benefits would be that the restaurant is student owned, therefore students can control the menu and have lots of input, Peters said. The problem is the initial costs would be very high. 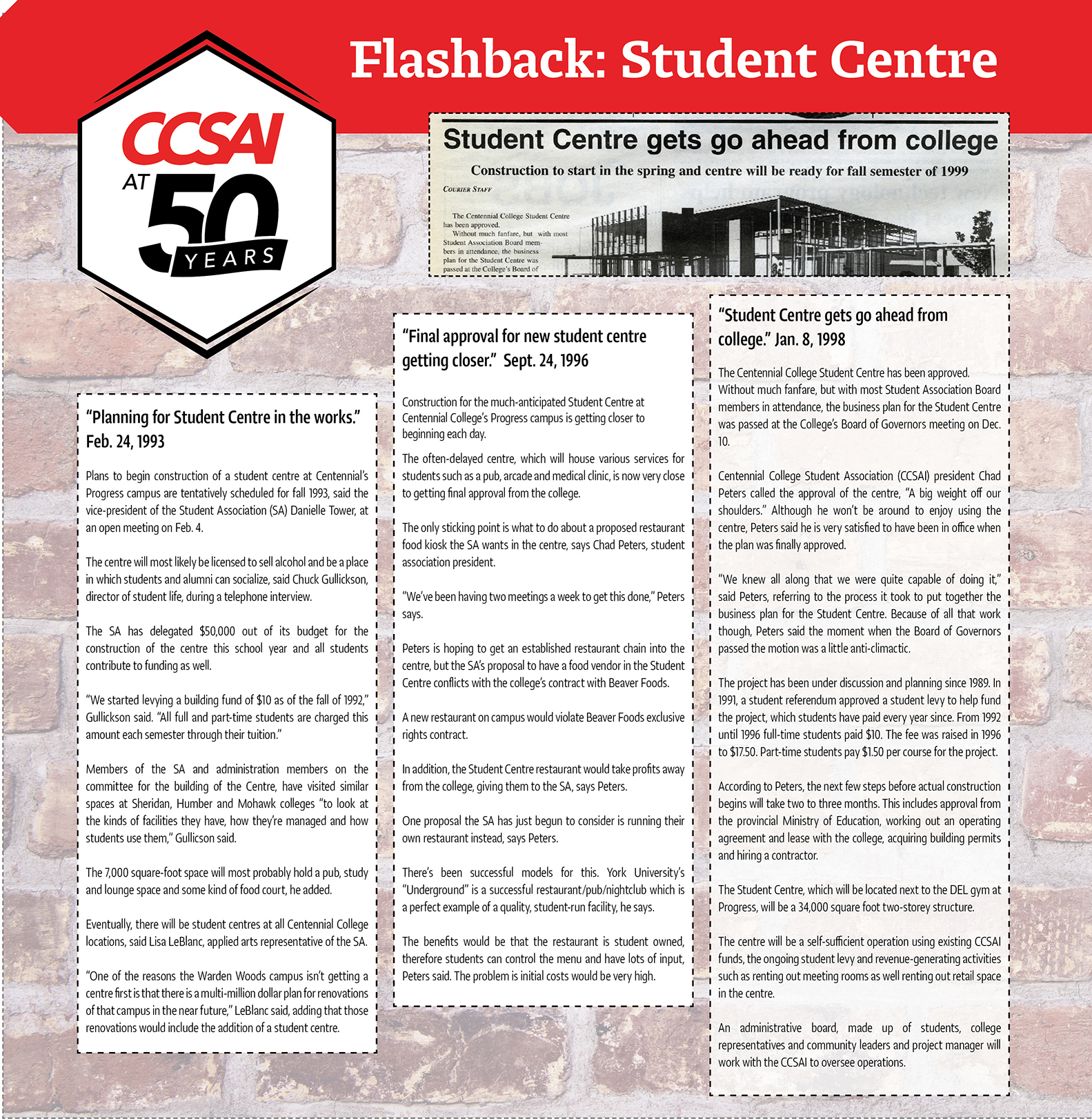 The Centennial College Student Centre has been approved.

Without much fanfare, but with most Student Association Board members in attendance, the business plan for the Student Centre was passed at the College’s Board of Governors meeting on Dec. 10.

Centennial College Student Association (CCSAI) president Chad Peters called the approval of the centre, “A big weight off our shoulders.” Although he won’t be around to enjoy using the centre, Peters said he is very satisfied to have been in office when the plan was finally approved.

“We knew all along that we were quite capable of doing it,” said Peters, referring to the process it took to put together the business plan for the Student Centre. Because of all that work though, Peters said the moment when the Board of Governors passed the motion was a little anti-climactic.

The project has been under discussion and planning since 1989. In 1991, a student referendum approved a student levy to help fund the project, which students have paid every year since. From 1992 until 1996 full-time students paid $10. The fee was raised in 1996 to $17.50. Part-time students pay $1.50 per course for the project.

According to Peters, the next few steps before actual construction begins will take two to three months. This includes approval from the provincial Ministry of Education, working out an operating agreement and lease with the college, acquiring building permits and hiring a contractor.

The Student Centre, which will be located next to the DEL gym at Progress, will be a 34,000 square foot two-storey structure.

The centre will be a self-sufficient operation using existing CCSAI funds, the ongoing student levy and revenue-generating activities such as renting out meeting rooms as well renting out retail space in the centre.

An administrative board, made up of students, college representatives and community leaders and project manager will work with the CCSAI to oversee operations.

Construction for the Student Centre at Progress campus has begun!

Hoarding (the fencing that contains the construction site) is being erected this week.

This map details the site and shows where the Student Centre will be built. Changes in traffic flow will be phased in over the next month.

Watch The Courier for regular updates on the project.

If you have any questions about the project, please do not hesitate to contact Shan Rajadurai, CCSAI President (ext. 2324), Penny Kirlik, CCSAI Executive Director (ext. 2206). 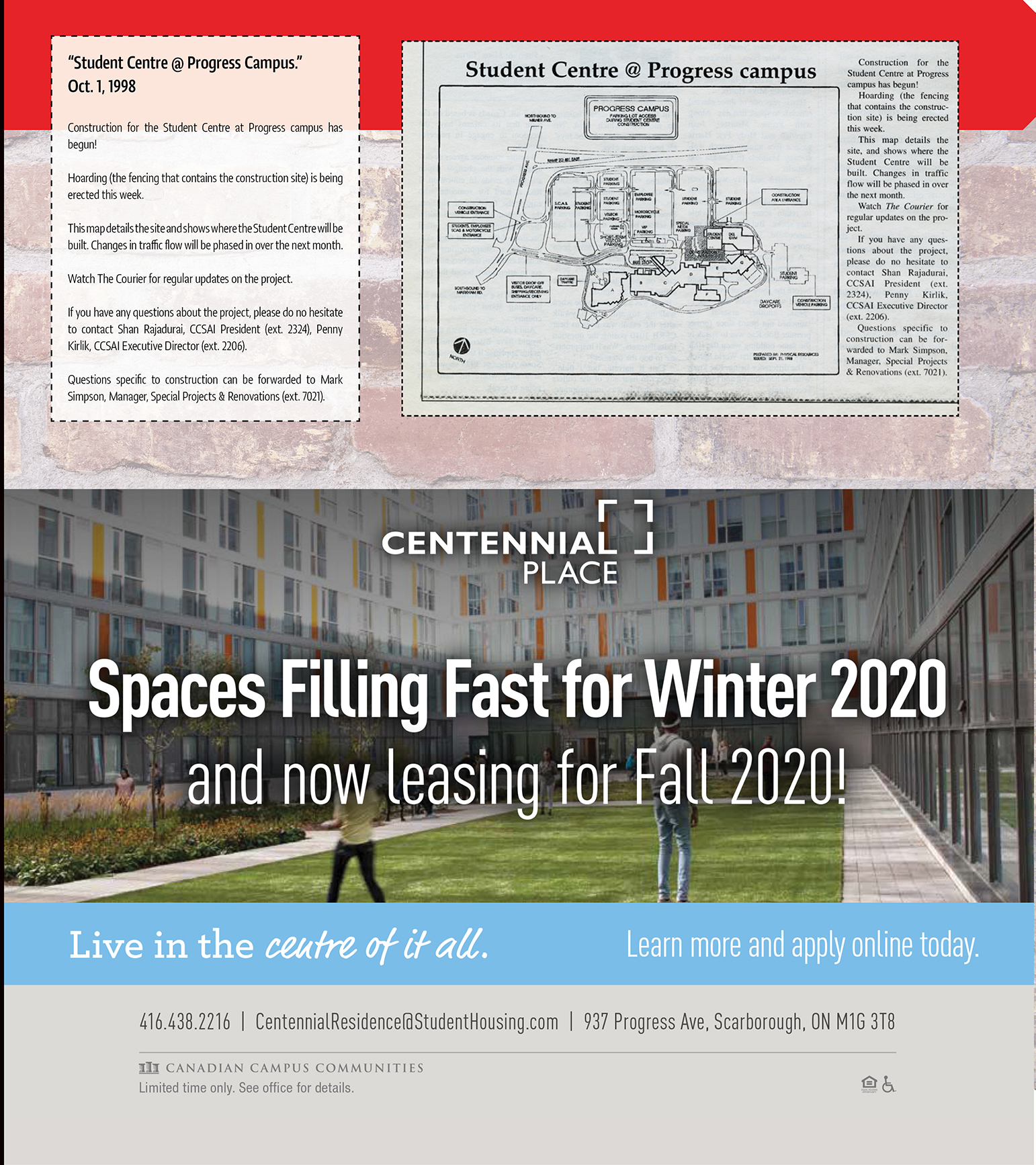