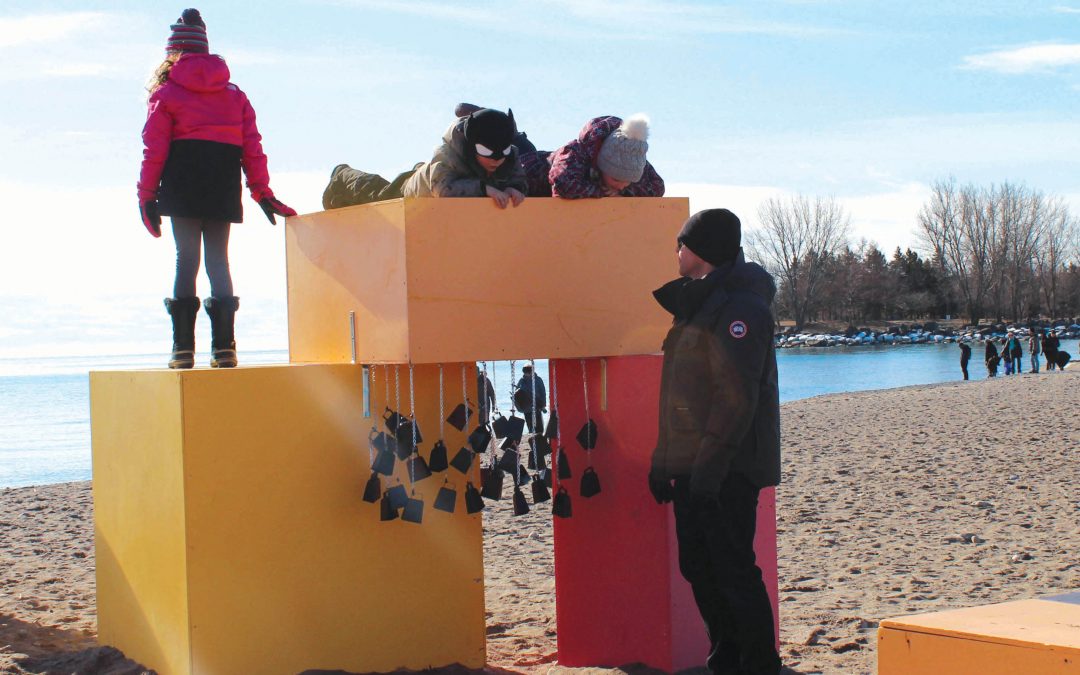 For the first time in the design show’s six-year run, Centennial College will be participating in Winter Stations at Woodbine Beach. Winter Stations is an international design competition that receives hundreds of applications from hopeful designers, all vying for the chance to construct their concept on the beach.

“It puts them on a level with internationally acclaimed peers,” McMahon said. “It’s a great learning opportunity.”

McMahon described this year’s theme of “beyond the five senses” as being akin to the feeling you get when you eat a really good dinner while watching live music. The goal was for the pieces to be immersive and engaging, and to bring people happiness.

The Beaches Percussion Ensemble, the Centennial student piece, is made up of 11 brightly coloured boxes that are the tones of a sunset. They are stacked in a playful, climbable way. A large number of cowbells hang off of one spot. Sticks hang from others so that the boxes can be pounded like drums. Graffiti on the piece is encouraged, and several beachgoers have already obliged.

“The public can play along with the sounds of nature, the sounds of the beach,” said Nick Davidge, a second-year fine arts studio student and head of construction on the project.

Davidge said that they decided to make a musical instrument for their piece, but that he also wanted to encourage people to do graffiti because it allows people who wouldn’t normally pick up a can of spray paint to do so, encouraging people of all ages and talent levels to get creative.

“Through my art, I really try to find ways to engage people, to get them to have some kind of creative expression,” said Zia Foley, the head of the project. “I think it’s really important for us as humans to do that.”

In addition to Foley and Davidge, who also goes by the professional pseudonym Mind, the project team was made up of five other students across the graphic design and fine art studio programs.

“It was a project where a lot of people came together,” said Davidge, discussing how the contributions of their family, friends and teachers made the project possible. “It was a community effort.” 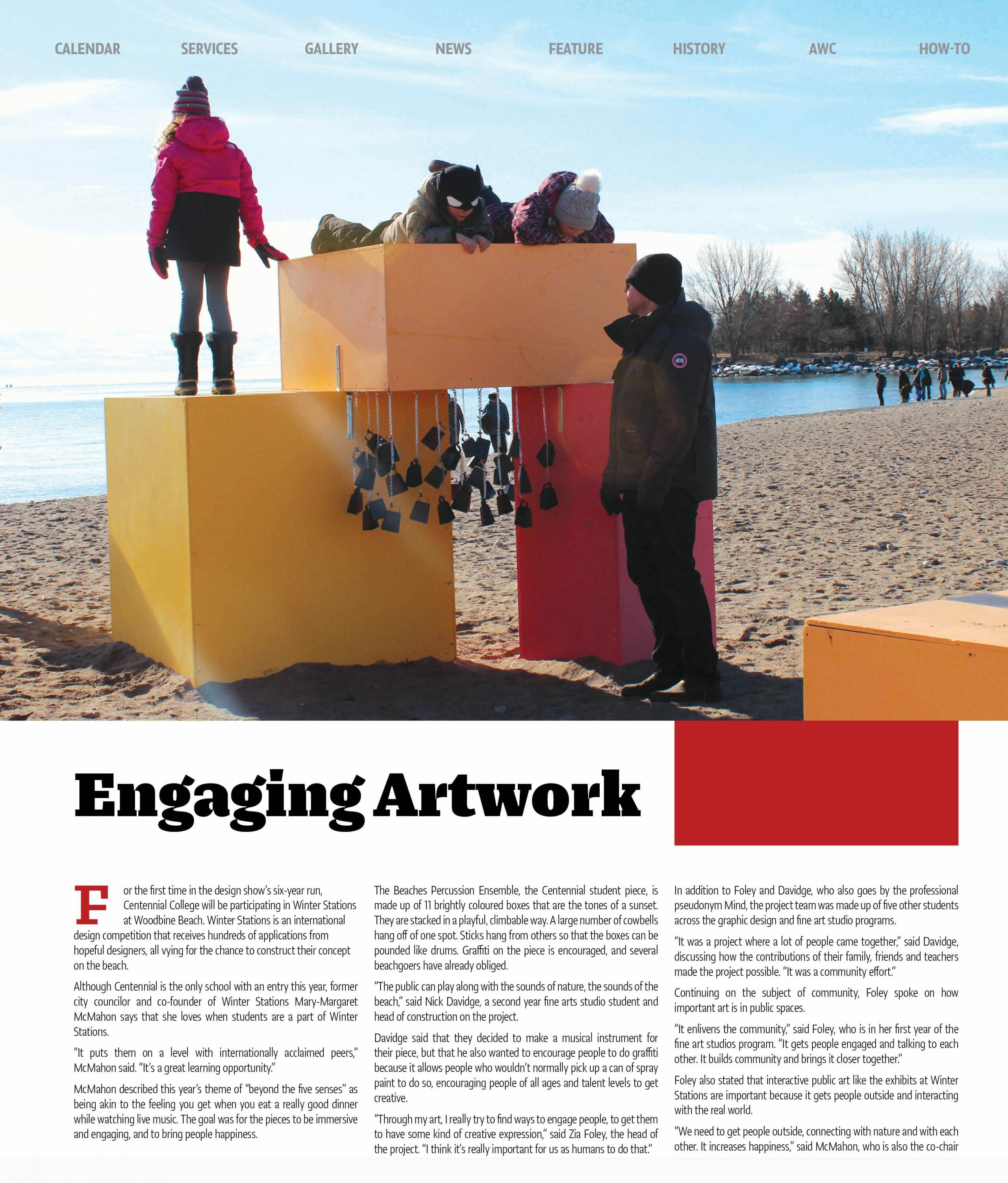 Continuing on the subject of community, Foley spoke on how important art is in public spaces.

“It enlivens the community,” said Foley, who is in her first year of the fine art studios program. “It gets people engaged and talking to each other. It builds community and brings it closer together.”

Foley also stated that interactive public art like the exhibits at Winter Stations are important because it gets people outside and interacting with the real world.

“We need to get people outside, connecting with nature and with each other. It increases happiness,” said McMahon, who is also the co-chair of the jury of Winter Stations, echoing Foley’s sentiment. “It’s a great way to get people off the couch and out of their jammies!”

McMahon spoke with people who had come from all over the GTA and beyond to Winter Stations to see the art. But despite its popularity, they’ve struggled to fund the event every year. This resulted in fewer installations than the year previous. She states that while they do get some support from developers, they haven’t been able to secure solid funding.

“It’s a huge opportunity that’s missed for the community,” said Foley, on the lack of public funding available for public art. “There was a lot of public interest here, and people enjoyed themselves. There are very few opportunities like this in Toronto and I’d like to see more.”

When asked how one can better support public art installations, McMahon had a simple answer: come out and enjoy it. Support the artists, whether that means retweeting an event or posting a picture on Instagram.

“Arts and culture are the number one reasons people come to Toronto. We need to support artists.”

Winter Stations were on display at Woodbine Beach until March 30th.

The covid crisis hit during their latest exhibition, so Urban Gallery have been putting up the images on their facebook page as an online exhibition. 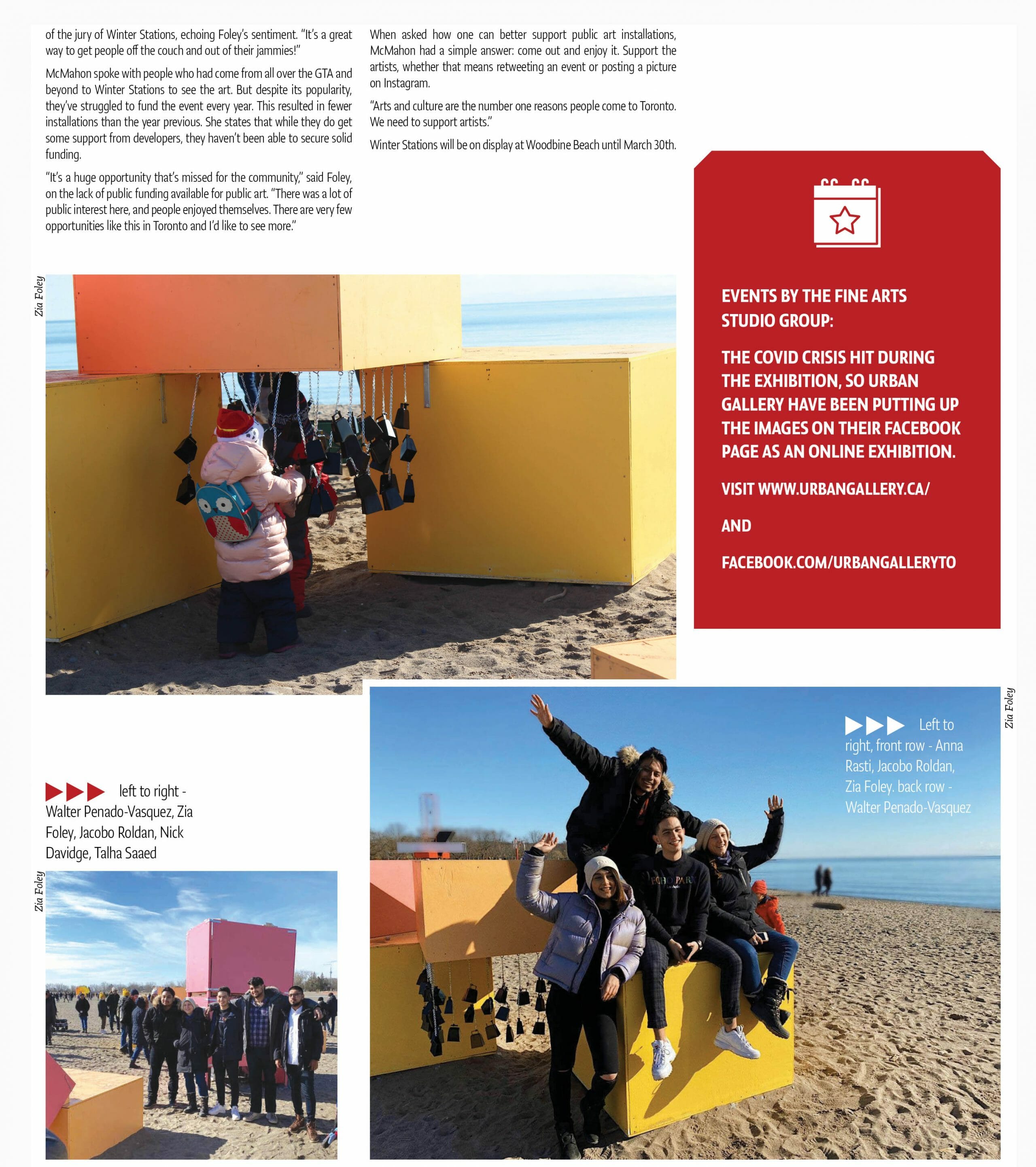