Aaron is an Actor, Writer, Director, and Producer. His script, RESPECT has been chosen as the main class project in The Advanced Film Studies – Script to Screen Program. Aaron wrote and directed, AMBIGUOUS and CHARMING MONSTERS at the Toronto Fringe Festival, and FRIENDLY FIRES, a web-series based on his experiences in the Entertainment Industry. Previously he graduated the Humber Theatre Performance program with Honours and the Acting Achievement Award. He graduated George Brown’s Introduction to Performing Arts Careers with Honours and studied the Comedy Writing and Performance program at Humber Comedy School.

Joshua Miller is a freelance writer and mental health advocate. Joshua writes about anime, books, campus life, and mental health. Having earned his BA (Hons) in Arts Management at the University of Toronto, he is currently enrolled in the post-graduate publishing program at Centennial College. Joshua previously led an arts-focused youth organization for almost 6 years aimed at providing a safe space for young artists struggling with mental illness or bullying which had him named one of Canada’s Top 20 Under 20. Joshua is an Associate Fellow at the Royal Commonwealth Society.

Lora is a Graphic Design student in her final semester. When she’s not designing, she enjoys video games, photography and spending time outside. Lora loves animals; She has one dog and three snakes, and hopefully a pug or two in her future.

Passionate about visual communication, Natalia is a Designer from Brazil pursuing a post-grad diploma in Interactive Media Management, currently specializing in user experience strategy for digital platforms. Natalia is always motivated by the excitement of learning from a different perspective and by discovering inspiration around her to create visual narratives.

Rashida Powankumar is a journalism student in her last semester. She is looking forward to pursuing so much more after graduation. One of her goals is to begin a business venture, “Rashida writing services” which will offer a wealth of services to paying consumers.

Zainab is a graduate of the Marketing Management program. Being new to the country, she’s always finding chances to do something different and is a food enthusiast and coffee crazy!

As a student advisor at the college & a passionate writer for CCSAI; she’s looking to help students through different aspects of her work. Who says you need to wear just one hat? ☺︎ 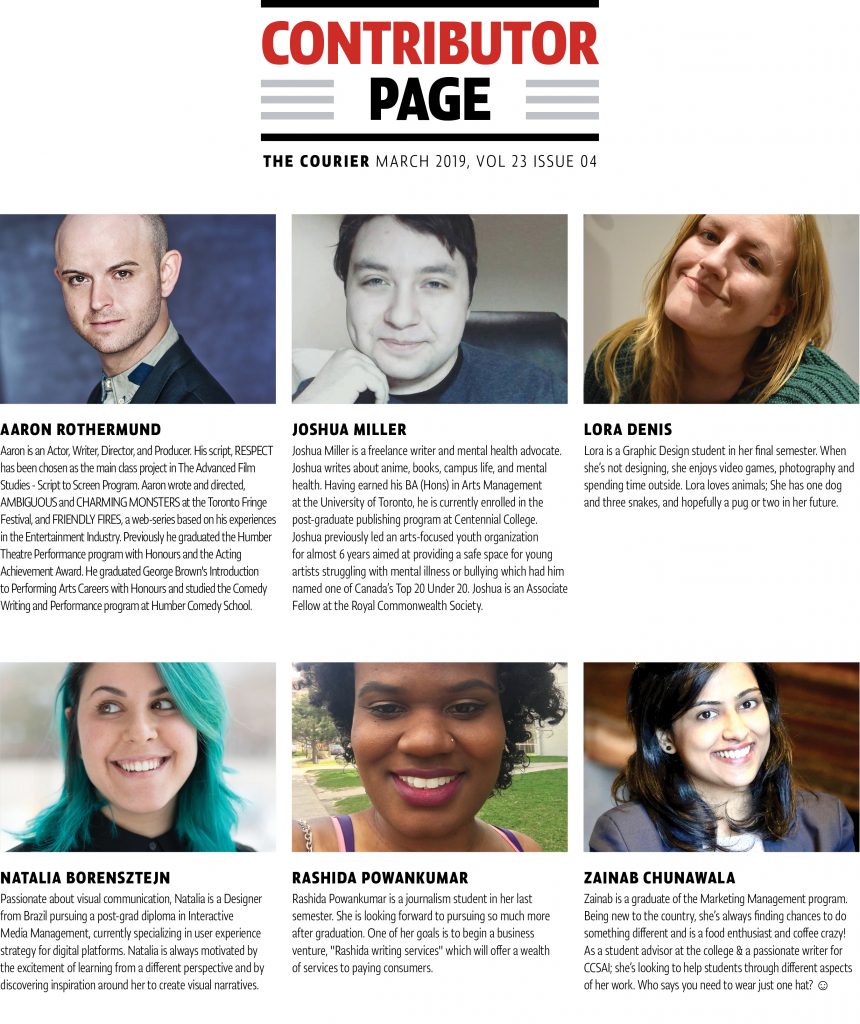