The CCSAI Anime Guild boasts an online community of over 230 members on Facebook and plays a key role in providing a welcoming space for all anime and manga fans at Centennial College. The Courier wanted to catch up with the club to see how they’re doing.

The Courier spoke with the current president of the CCSAI Anime Guild, Kyle Doroja, to discuss the club, its origins, future, who should join, and what are some recommendations he has for those new to anime.

What is the mandate of the Anime Guild?

When was the club started and how did the club come to be?

Our club started in 2014 or 2013, and it started, from what I was told from the original president that it was a bunch of him and his friends in the now club room and they were hanging out and CCSAI approached them to make a club and they did and that’s how our club got started.

What are some of the activities or programs that the club offers to its members?

We’re currently doing something new for the Anime Guild that I suggested that we did in my role as president and that was we have different months based on different genres of anime and within those months we do certain activities and screenings related to those themes. During the beginning of the school year, it was school related, so a lot of our events and screenings were school related anime and help students get used to the college atmosphere. This month is horror because it is the month of Halloween and scary stuff. We plan a lot of screenings of anime, a lot of activities, and a lot of outings.

What are some of those activities and outings, if you could expand on that?

So, our outings will be going to see movies, all the things related to Japanese culture, trying out new food. We have done origami classes, Japanese lessons, video game events. We recently had a big event happening which was a cosplay café so we have had a lot of different activities.

Who do you think should check out or join the club?

Students that already enjoy anime or people who want to find an area where they can explore and discover the culture of anime and what it’s about and just a place where people can socialize and meet new people. We don’t only focus on anime but on comics books, video games as well, and other sorts of things.

What are some next steps for the club, any new programming or expansion?

Regarding the future and stuff that we would like to see change, for a long while, a lot of the club’s activities and events and meetings have been held at Progress (campus). We are trying to expand and go to other campuses so we can meet the students at their campuses compared to coming to Progress all the time. We also want to create a club that is more involved with its members . . .we see it as a place where we feel safe and we really have a family dynamic to our club where everyone is welcome. I think the only changes I would like to see in the future include more of the culture and history of Japan, not just the anime side but also their food, their dialect, so it’s more of a Japanese club than an anime club.

If you were speaking to someone who never saw anime before, what is your elevator pitch to get them to start watching?

It is originally a form of animation unique to Japan, just like how cartoons are for us. But has greatly evolved in a sense where it is a genre with genres of its own, where it’s like TV shows here in Canada and the U.S., there are anime about love and romance, about horror and gore. There are anime that are sports related. If you have an interest in a certain genre, you will most definitely find an anime that relates to it.

If you could recommend one anime for students to watch, what would it be and why?

I think for me I couldn’t really recommend one, because I would likely recommend something that I have watched and enjoy a lot, a lot of people have different tastes. But I think some anime that people should watch, there is one, it’s a newer anime that is called My Hero Academia. It’s a show about a school of students who have powers who are trying to be the next generation of superheroes. Attack on Titan, which is more of a darker show, about a somewhat apocalyptic atmosphere and there are these titans that want to invade this walled off city, and there’s a bunch of people trying to defend the city against these titans. These are more the mainstream ones you are more likely to see at a Hot Topic, they are well known, but there are a bunch of hidden gems as well.

What does anime mean to you?

I see it as a medium where you can use it to sometimes escape reality. Where you can sometimes see characters and emotions you are currently experiencing and sometimes it can help you in certain situations, be it family problems or romance, all kinds of stuff because a lot of the time anime tends to teach you lessons and goals through their animation and stories. In my life, personally, I have gained a lot of knowledge and friendships through anime. When I came to the college I didn’t know anyone and then the original president noticed I like anime, introduced me to the club and I went from a member
to a president.

What is one big misconception about anime that you find isn’t true?

I think the one huge misconception is that the whole “anime is for kids” deal where “you like anime? Isn’t it a kid’s things?” Yes and no because as I’ve mentioned, it is a thing that has evolved so much. Yes it can be a kid’s thing with anime like Pokémon but then there is anime like Tokyo Ghoul, Attack on Titan, and Corpse Party. You wouldn’t dare show that to a kid… It (anime) can be enjoyed by people of any ages.

Do you have any final words?

If you are interested in the club, feel free to join, we are always looking and always accepting. Don’t ever be embarrassed if you want to show interest in the Anime Guild because we have members who enjoy anime from different genres and enjoy characters of different types… Our club is one of the more popular clubs, we don’t do a lot of the embarrassing things you may think an anime club does. We may do it on occasion but not a lot, not all the time.

This interview has been edited for clarity and length. 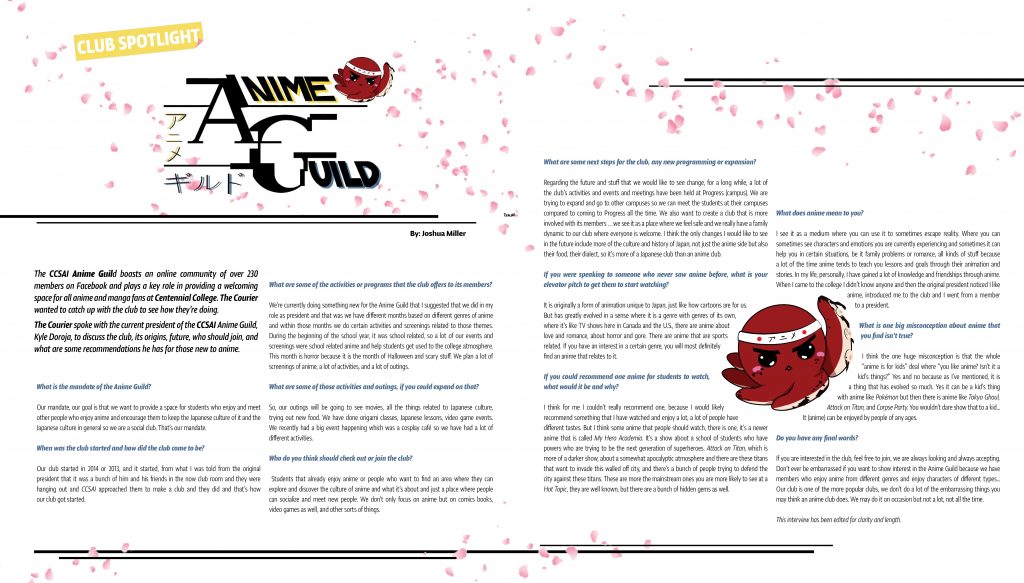