Campaign season is almost here, and despite how little the rest of the world may care about it, Ontario’s upcoming provincial election will have a big impact on the people who live here.

Echoing our neighbors down south, the process currently looks like it’s going to be decided on public perception and personality. Doug Ford unexpectedly came out on top as the new PC leader. Meanwhile Wynne’s reputation with the voters will be crucial in how the Liberals fare, with NDP leader Andrea Horwath still struggling to define her party and remain relevant.

With such diverse platforms and stances on issues like infrastructure, minimum wage and housing availability, it’s understandable that people will have divisive opinions. But what does Centennial really think of these elections and the voting process as a whole?

“I’m conservative. My views towards how a society should be run are conservative…If you don’t vote you don’t have the right to judge any type of political party. So if we’re judging any type of party or political view you have to be able to be part of a certain view. You can’t just judge everybody else.”

“It is [important to follow politics] because you know politics like they do affect our personal lives and it’s all about the society because politics they can really impact a society and as we’re part of society we should follow it.”

“If I am able to, I will probably vote, but I’m not sure as an immigrant if I can vote or not. I prefer the Liberals because of their work, like for the people, for the public, they care more.”

“It was interesting that Mr. Ford was able to get in for the PCs. He just kind of snuck in there and was a competitor. I think it’s typical of the political climate, we’re seeing people from the far right versus the left, just as we’ve seen south of the border I would say it’s probably as disunited as I’ve seen the political climate, nevertheless you’re seeing people that are more into the populist ideas. I think it’s a sign of the times.”

“The only election I voted in was the school election for president of CCSAI. I do this because there’s not so many problems I have here, that’s why I’m not thinking there’s a reason to vote because I’m satisfied with everything that’s going on… I guess it’s pretty important for your country to vote if you’re not fine with something. But why do we need to vote, everything’s fine.” 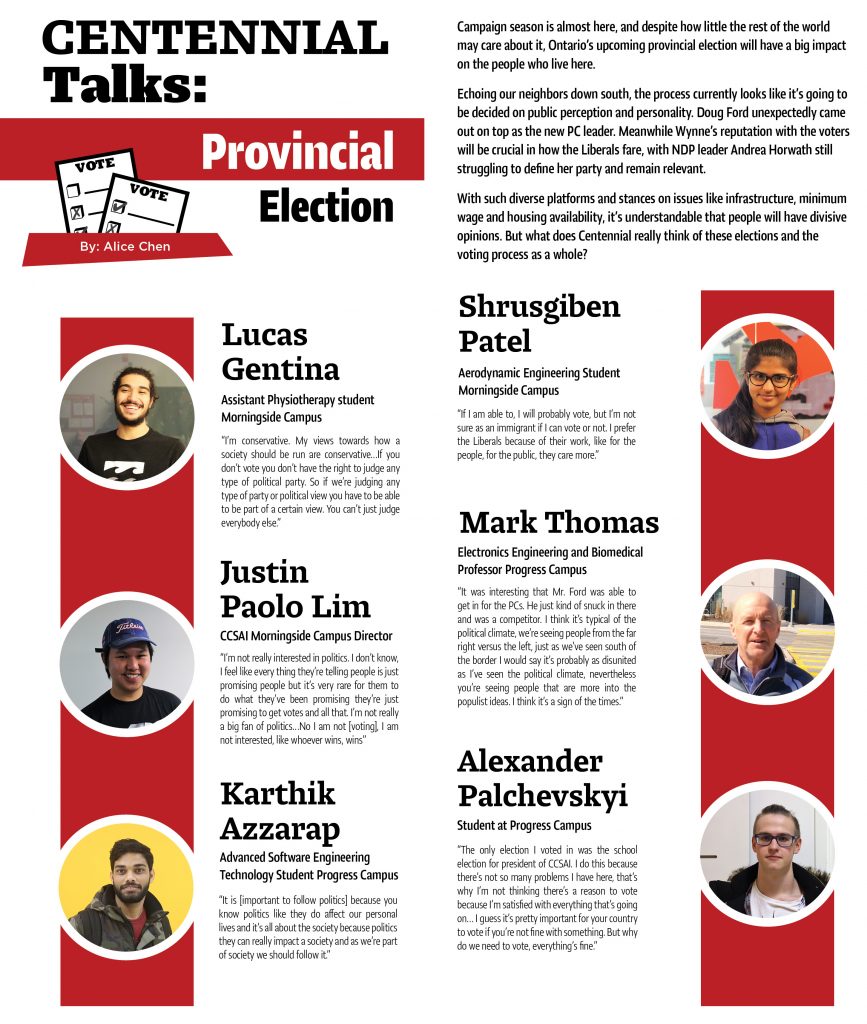