As the soccer season wraps up, both the women and the men are at opposite ends of the spectrum.

It has been a trying season for the women as they lost their first ten games of the season, with the last two games being outscored, 13-0, against the Durham Lords and the Seneca Sting, heading into their final road game against the Loyalist Lancers on Sunday, October 14.

However, the lengthy losing streak came to an end on that afternoon as they defeated the Lancers, 2-1, on the strength of goals from forwards Faby Monteiro and Sayla Peters. Currently sporting a 1-9-1 record on the season, the ladies hope to end their season on a high note at home against the Fleming Knights.

Midfielder Jessica Friend has been a bright spot, making the transition from a playmaker at Western University to the offensive focal point at Centennial, scoring three goals so far. Goalkeeper Sabrina Rizzo, in her first season as the starter, has kept her team in games, ranking second in the OCAA in total saves made with 134.

For the men, after a 6-2 loss in the crossover match last year against the Sheridan Bruins that left a bitter taste in their mouths, they were determined to take that next step this year and advance to the provincial championship weekend for the first time in 20 years.

With one more game left to go in the regular season against the Fleming Knights, they are currently in third place in the OCAA East with a 5-2-2 record (17 points). Striker Liam Cox has taken his game to another level, leading the team with eight goals thus far.

Meanwhile, on the backside, the defensive quartet of Ostap Hamarnyk, Rodion Matveev, Kevin Segamanasinghe, and Kyle Cohall have been nothing short of fantastic while rookie goaltender Chim Oneyeka has quietly had a solid season, with four clean sheets.

It is not determined who Centennial will play in their crossover match this year as it remains to be seen where they finish in the standings. But it is confirmed that it will be held at the warm confines of home in Progress Turf Field on Saturday, Oct. 20 at 6pm.

Come out to support the Women’s and Men’s Soccer teams as they go up against Fleming in their last regular season home game tonight ‼️. Pick up a Fan Colts Cards at the entryway of the field! Collect a stamp on your card each time you attend a game and after 10 stamps you’ll get a prize! 🎁🔥 #gocolts #horsepower #centennialcolts #coltscard #ccsai 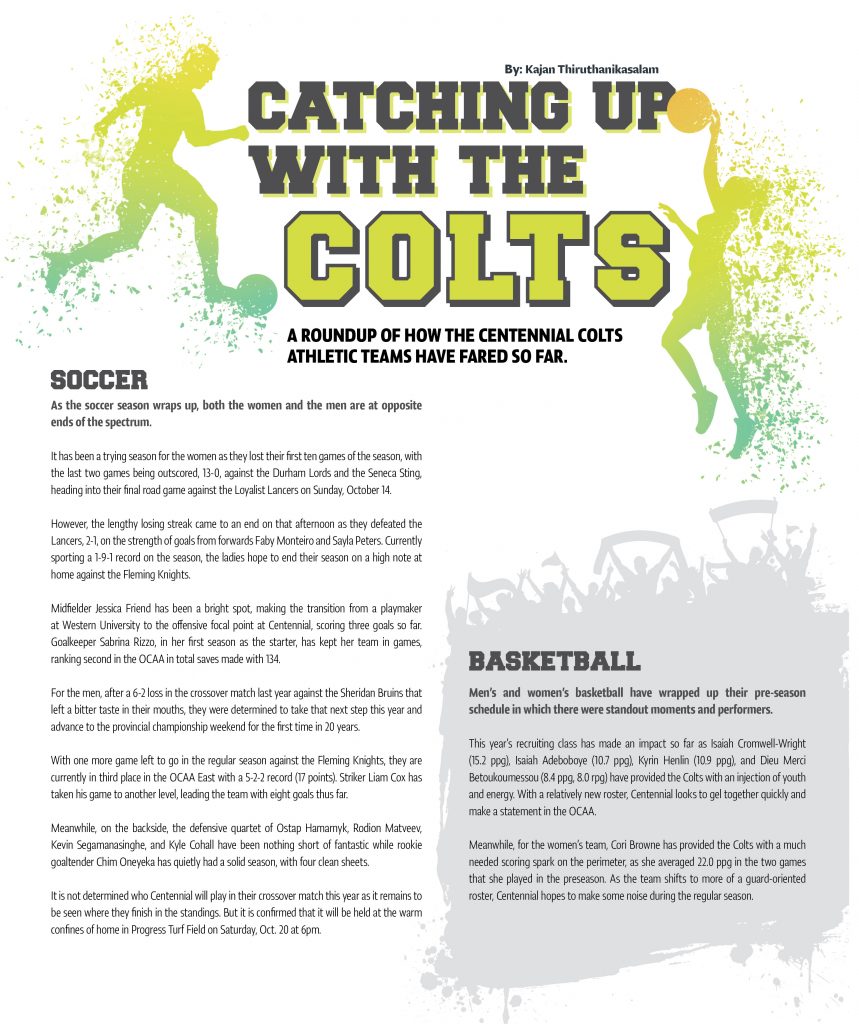 Men’s and women’s basketball have wrapped up their pre-season schedule in which there were standout moments and performers.

This year’s recruiting class has made an impact so far as Isaiah Cromwell-Wright (15.2 ppg), Isaiah Adeboboye (10.7 ppg), Kyrin Henlin (10.9 ppg), and Dieu Merci Betoukoumessou (8.4 ppg, 8.0 rpg) have provided the Colts with an injection of youth and energy. With a relatively new roster, Centennial looks to gel together quickly and make a statement in the OCAA.

Meanwhile, for the women’s team, Cori Browne has provided the Colts with a much needed scoring spark on the perimeter, as she averaged 22.0 ppg in the two games that she played in the preseason. As the team shifts to more of a guard-oriented roster, Centennial hopes to make some noise during the regular season.